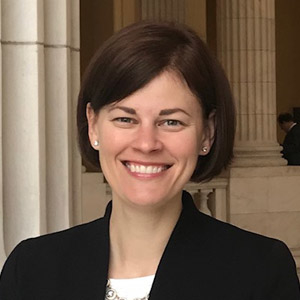 Sarah Curtis has served as Deputy Chief of Staff and Legislative Di-rector for Congressman Joseph Kennedy (MA-04) since 2013. She is responsible for a portfolio including health care, telecommunica-tions, tax, and appropriations issues.
Previously, Sarah worked at the U.S. Department of State in the Trafficking in Persons Office which leads the United States’ global engagement on the fight against human trafficking. Additionally, she has worked at both the local and state levels of government and for members of the House of Representatives from Ohio and Kentucky.
A native of the State of Ohio, Sarah earned a bachelor’s degree in political science from the Ohio State University and a master’s degree in political management from George Washington Universi-ty.